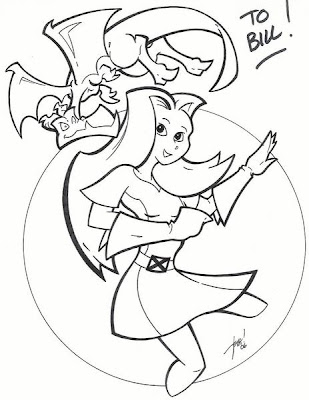 I was literally making my final pass through Artists Alley at the 2007 New York Comic Con when this drawing of Kitty (Ultimate universe version, I guess) and Lockheed by Jeff Chandler caught my eye. I had passed by his booth a few times and noticed some of his Star Wars and Lego-related artwork, but I never got a chance to stop and talk. This was the original for an image that appeared in the sketchbook he was selling - and a steal at 10 clams - but he said no one who stopped by was interested in it because they preferred him to draw in their own sketchbooks. I had no such problem.