As part of the birthday weekend, I went to a semi-regular comics, toys, and collectibles show at a K of C hall in South Attleboro, MA, on Sunday. It's nothing fancy, and the "toys and collectibles" part always seems to be better represented than the comics (though it paid off this time, as I finally got my hands on that Doctor Who action figure I wanted), but usually a good place to pick up some fun books for cheap, and since my work schedule hardly allows me to go any more, I check it out whenever I actually get the chance.. For example, Adventure Comics #411, which I picked up for a buck.* Not the sort of thing I was looking for, admittedly, but check out the nearly perfect cover. I think you'll agree with my handily numbered reasoning process that I needed to get it. 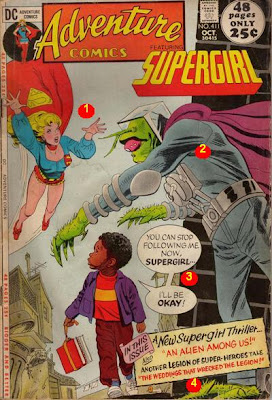 1. Bob Oksner draws Supergirl. You can't deny the cuteness there, even in the lame-o hotpants costume. Added bonus: by this point, Kara was a college graduate, so it's not nearly as creepy as admiring an Oksner Mary Marvel, who as you'll recall, is underage, ya perv (by the way, shouldn't someone remind DC of that before Countdown hits the stands?).

4. Blurb that not only has the stones to call the cover story a "thriller," but also promises a Silver Age Legion of Super Heroes reprint. Always a good thing.

5. (Not Shown) Did I mention it was a measly buck?

So as you can see, the cover of Adventure Comics #411 is Nearly Perfect by DC standards. Really, the only thing needed to achieve true perfection is go-go checks across the top. I think I'll add them. 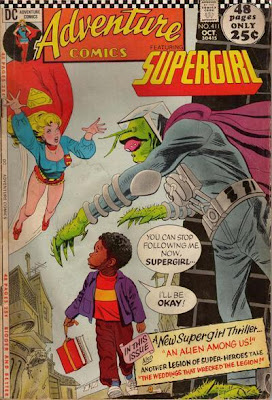 
*Other dollar finds: an issue of E-Man (one of the Modern Comics reprints, but still) and a 100 page issue of The Brave and the Bold. DC 100 Pager for a buck? Happy birthday to me!