Semi-regular short(ish) blurbs about what I've been enjoying in and around the pop cultural landscape. Sort of like when I'd do the short thoughts about comics, but a little more wide-ranging. 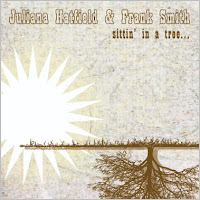 Juliana Hatfield & Frank Smith: Sittin' in a Tree EP - The regulars out there know full well that my love for Juliana Hatfield and her music runs deep, and that I'll buy anything and everything she releases, the way some people hunt down every single Dylan track they can find, so my opinion will be unfairly biased from the start, but this? This was good. Juliana has done some of her best work lately with other folks (like the Blake Babies reunion and the two Some Girls albums), and this EP with Frank Smith (a band, not a man) is no exception. Her wispy voice and the band's alt-country sound play well together. But it makes sense, since some of Juliana's best solo tracks of the past few years have had some decidedly country leanings, anyway, so it's sort of a no-brainer, really. Like I said, I'm biased going in, but after being left a little cold by Juliana's last few albums, Made in China and live album The White Broken Line, it's nice to see a return to stronger form from the excellent Ms. Hatfield, since this is her best outing since In Exile Deo and the last Some Girls disc. And I'll be checking out more from Frank Smith in the future. Highly recommended.

Star Wars: The Empire Strikes Back (the Special Edition version) - And no, I will not call it Episode V. Nor will I call the first movie A New Hope. That one is, was, and always will be Star Wars, and this is Empire, dammit! That aside, all the talk of the Star Wars anniversary this weekend got me nostalgic, and I actually found myself with a few free hours Sunday afternoon, so I popped Empire (my favorite of the series, and the first movie I ever saw in a theater) into the DVD player and geeked out. And yeah, I watched the updated Special Edition from the first DVD release a year or two back, because I refused to buy the original trilogy on DVD again just to get the original versions as a bonus. Besides, honestly? I don't mind the Special Editions so much, and truth be told, Empire probably holds up the best since any changes made seem to be largely cosmetic. Some new background scenery, better looking Wampa, and the real Emperor gets dropped in, but beyond that, nothing too jarring. Not to the scale of Han and Greedo's lunch date or the dance number in Jabba's palace, anyway. And while it suffers a bit from not being a complete-unto-itself story, like the original Star Wars (or, I suppose, Phantom Menace), it still holds up as the best of the series, I think, and even gets me excited for the prospect of watching Jedi again, even though I know that the afore-mentioned dance number, Ewoks, and newly-added ghostly Emo-kin Skywalker await.

Birds of Prey: Of Like Minds and Sensei & Student TPBs - Alright, the Greg Land covers are sort of ridiculous, and the interior art by Ed Benes brings a little too much cheesecake to the party at times (and while I certainly enjoy a little cheesecake of both the literal and figurative varieties now and then, you can have too much of a good thing), but the stories by Gail Simone are exactly the sort of thing I'm looking for in my DC comics: stories that play in that great big sandbox that is the DC Universe and not only use as many of the toys as possible, but use them in new, interesting ways. I don't think that Oracle, Black Canary, Huntress, or any of the others appearing in these two trades were always treated particularly well over the years, even by creators who profess to like them, but Simone elevates them to a much higher (and significantly more powerful) level here, proving they're as good at the game (and when it comes to getting their hands dirty, probably better) as any of the big boys. And I must say that I really appreciate that this is much more of an espionage book than I was expecting... again, it comes down to using the toys in new ways. After so many years of all-out super-heroics, it's nice to see over the past few years that DC has learned to embrace the fact that not all of their characters fall neatly into that particular rubric, hence books like this or Shadowpact or Checkmate. Somehow this title never blipped on my radar over the years. I'm going to have fun playing catch-up with the collections.
at May 29, 2007
Labels: Birds of Prey, comics, Juliana Hatfield, movies, music, Star Wars, The Dig List