Links, a comment or two, and maybe a future episode of Maury Povich.

Hey kids, free comics - you can read Oni's Wasteland #1 by Antony Johnston and Christopher Mitten online for the low, low price of Free Ninety-Free. You can even choose between viewing it in JPEG, PDF, or CBR formats.


Comics Should Be Good pays tribute to the late, great Mike Parobeck, naming him Reason #66 of the 365 Reasons to Love Comics. Parobeck remains one of my favorite comics artists ever, so I'm hard-pressed to disagree. A book celebrating his art is long overdue... hey TwoMorrows, how about a Modern Masters volume?


You might want to think twice about plunking down $150 for a character head sketch from Brian Bolland. I'm just saying.


So Discount Comic Book Service has this banner up on its site to promote DC's upcoming weekly series, Countdown (which is the sequel to their current weekly book, 52):

"Yes, folks, you've plunked down $2.50 a week for an entire year, but if you want to see how the story actually ends, get ready to shell out every week for another whole year. And this time it costs more! Come and get it, sheep!" And people wonder why I've been so cynical about the Big 2 these last few months.


The Comic Sketch Gallery web site has switched servers and should hopefully be free of the inconsistent availability that plagued it throughout its first few months of existence. There's a lot of really amazing sketch work from all manner of artists available for your viewing pleasure, so check it out if you get the chance.

Yet another tragedy has befallen a superhero that regular people might have actually heard of, and Mike Sterling has the story!

Hey, look, some yahoo bid $200 for both the regular and variant editions of yesterday's Captain America #25. Hmmm... who do I hit first: the guy who sold 'em, or the guy who bought 'em?

Also, please note that the winning bidder has a feedback number of "0." Good luck getting your cash, Speculator Pandering eBay Seller Man!


Finally I present you with this: 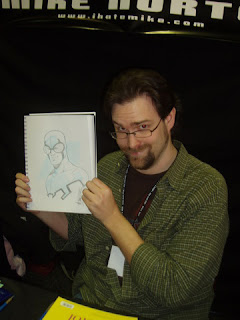 New DC exclusive artist Mike Norton (with the awesome
Blue Beetle sketch he drew for me at NYCC). 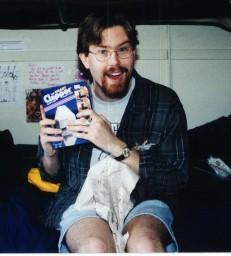 Me, circa 1998 (with a Clapper that Erin
bought for me as a 22nd birthday gift).
Separated at birth? And maybe with a time machine? Mom, is there something you're not telling me?
at March 08, 2007
Labels: comics, life