He's Not Who You Think He Is! 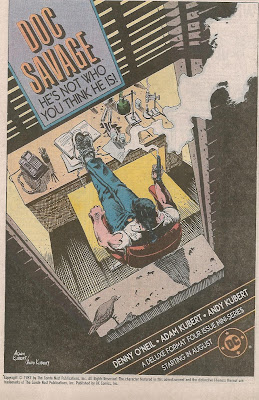 Based on this ad, I can't help but think that Doc Savage wasn't who DC thought he was at first, either. I'm no expert, but I've read a number of Doc's prose and comic book exploits, and not once did he ever come across as a raven-haired, pony-tailed, smoking-revolver-packing grizzled P.I. type. And he didn't come across that way in the mini-series (and subsquent ongoing) that DC is advertising here, come to think of it.* Which makes me think that either A.) this is a bait and switch to prepare you for the fact that it wasn't a typical Doc Savage story (see asterixed footnote below); or B.) they originally planned to take the character concept in an entirely new direction and Conde Nast put their foot down.

Anyone know if there's a story here?

(And no, this above image wasn't a feeble attempt at the patented Kevin Church Jauntily Slanted Image, I just sort of suck at scanning some days.)

*Of course, Doc didn't appear in over half of that mini-series, giving screentime to his wimpy son, Clark III, and more Doc-esque grandson, Chip, but that's a whole other discussion topic for some other time, and probably some other blog.
at February 04, 2007
Labels: comics