Today's sign that not only is the Apocalypse coming, but that it might not be such a bad idea after all: 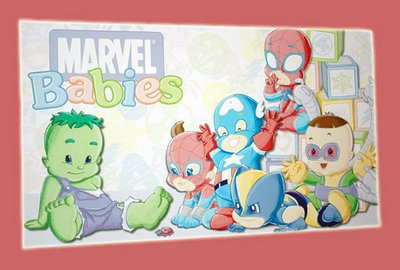 I realize this is probably the next logical step beyond the current kid-friendly "Spider-Man & Friends" line of products, which I do have to admit a certain begrudging liking for (if only because it means I can buy age-appropriate Spidey toys for the boy), but I can't help but think this is taking things too far. Infantizing known characters worked, I think, exactly once: Muppet Babies*, which was not only the first visitor to this particular concept well, but also had the added benefit of actually being pretty fun. Everything else just seems like a cheap knock-off. I mean, have you ever seen Baby Looney Tunes? Yeesh.

In the interest of full disclosure, though, I have to admit that the image of Baby Wolvie stalking the ladybug is kind of funny. I am suitably ashamed.

Read about this and other potential abominations before the Lord (including Baby Stooges) here.


Hey, Juliana Hatfield has more of her Honor System Downloads available on her web site. The new songs are mostly demos and alternate versions of her solo work, but there are a couple of Some Girls (her band with Freda Love and Heidi Gluck) demos in there, too. Download, listen, enjoy, and pay so that she'll continue to put up more songs.

On a related note, I feel compelled to tell you that the new Some Girls album, Crushing Love, is really good and well worth your music dollar. Go and buy it now. Now, I tell you!


Looks like I'm not the only comics blogger with the urge to purge - Scipio has been cleaning house, too, and explains the philosophy behind the decision better than I could (though I'd have left out the comparisons to Clean House, but that's just me). I'm right there with him on this - when you've got a toddler in the house, space and money become hot commodities, and this helps with both. Also, as I've said many, many times before, we hate where we live and hope to move, and have no interest in taking a lot of this stuff with us (hint, hint). Also also, and I'm sure Erin will love this part, I've come to realize that I'm never going to read a lot of this stuff again, so why not pass it on to someone who will and make a little cash on the side? I mean, yes, obviously there's stuff I'll keep forever - for instance, you'll get my precious few Lee/Kirby Fantastic Four issues when you pry them from my cold, dead hands - but a lot of this stuff is surprisingly easy to part with.


*Well, twice if you count Tiny Toon Adventures, but I don't, because I think that: A.) it used new characters inspired by old characters, not baby versions of the originals; and B.) it was genuinely clever and funny most days, and we never would've gotten Animaniacs without it, so we owe it a huge debt of gratitude.