Shilling and some thoughts on Chicago swag.

More eBayables, from my house to yours! Support the "Bill and Erin Eventually Wanna Move and Don't Want to Have to Take This Stuff With Them" Fund!

We're getting ready to enter the second phase of our eBaying, where we start to put up assorted household kitsch and baby items we received but never used, and in many cases never completely opened. I'll post links to those when they go up, in case anyone wants more than just my old comics-related ephemera cluttering up their homes.

The cool thing about not being able to cart as much stuff home from a con as you usually would is that you're actually able to read it in a reasonable amount of time. So I've got that going for me, which is nice. Here are thoughts on some of what I've read so far:

The Monkeynauts and Why We Call Them Robots by Sarah Becan - I picked these mini-comics up because they featured monkeys and robots (I'm not made of stone, people), and lo and behold, I actually learned something. The former documents the history of America's simian space pioneers (as allegedly reported by another monkey named Bombo), and the latter, as I'm sure you can figure out based on the title, talks about the origin of the word and concept of "robot," and their basis in the work of Czech playwright Karel Capek. Well-drawn, well-written, and some very interesting subject matter I hadn't really encountered before. Recommended. More info on these and other comics by Becan at her site, Jakze.com.

Save Spidey, Snakepit, and A Freebie I Forget The Name Of, Sorry! (obviously not the real title) from Young American Comics - Save Spidey is what happens when bored theme park caricature artists get ahold of some astonishingly terrible Spider-Man coloring books. Defacement antics ensue, and justifiably so, if that's the sort of officially licensed product Marvel's gonna let out the door. Snakepit is a quarterly collection of diary strips from Ben Snakepit. If you like that sort of thing, this is the sort of thing you'll like. I can't remember the specific issue number, but it had a Jim Mahfood cover, and that's alright by me. The last one was my favorite of the three, which makes me even more mad that I can't remember the title. Anyway, it documents Tod and Corey Marie Parkhill's grand plan of a Young American Comics coast-to-coast 2006 con tour, and how it was doomed to failure before it ever started thanks to their ill-fated RV, the YACMobile. Fun stuff all. The first recommended to fans of toilet humor or people who hate Marvel, the second to people who enjoy diary strips like American Elf or Squarecat Comics, and the third to people with eyes who can read. More info on these comics and more can be found here.

Little White Mouse: Open Space 1-4 - As far as I can tell, this is the last LWM mini-series, and it says a lot about a story that I can read the ending, and then want to go back and read everything else, and then read this again. To quote Kang (or was it Kodos?), holy flurking shnit! This story - a girl trapped for a year on an abandoned space station (with two service robots and an android containing the brain patterns of her late sister) tries to make her way home - was all kinds of excellent. The manga-flavored art was handled well and really fit the tone of the story, which was familiar without ever becoming cliched. I had the chance to pick-up the LWM Omnibus when I was at Paul Sizer's table, and I'm now kicking myself that I didn't. I'll correct that situation as soon as money and availability allow. Not just the best thing I read among the stuff I picked up at the show (sorry, Superman's Pal, Jimmy Olsen #88), but maybe the best thing I've read all year. Not sure what that says about either myself or current comics, seeing as this was released back on 2002, but oh well. Now I see what Johanna has been raving about for all these years. I should've listened sooner. More info on this and other projects at Paul Sizer's site.

Superman's Pal, Jimmy Olsen #88 - I'm not saying that this wasn't awesome, though. I mean, just look at the cover: 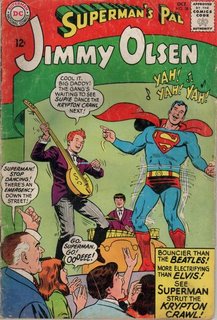 What's not to love? And yes, Superman really does ignore the problems of the world to dance the Krypton Crawl inside, and the reasons why are even a bit far-fetched for a Jimmy Olsen comic, but it's all kind of brilliant somehow. Let's just say that it wouldn't be out of place in an issue of All-Star Superman and leave it at that. I'll have whatever Mort Weisinger and company were having with a side of fries, thanks.

There's more to discuss, but that's all I'll do for now. It's getting close to lunch time, and there's food to be had out there somewhere.