"Is Chicago, Is Not Chicago" Day 2 - The Touristy Stuff

So yeah, day two of the Chicago trip. This one will be much shorter, since there are fewer anecdotes and I'm tired and don't want to type long. Lucky you!

Still on east coast time, we got up earlyish and grabbed croissants from the bakery in our hotel (French style hotel = tasty baked goods available for sale in the morning; a very good thing, indeed). The friendly airport shuttle driver lady had nothing better to do, so she drove us over to the Rosemont CTA stop so we wouldn't have to walk, which was cool, since walking is what we did for pretty much the rest of the day. We wandered around downtown for a little while, checking out the Marshall Fields building, that big sign in front of the Chicago Theater (and it was incredibly hard to resist the urge to recreate the end of the Perfect Strangers opening credits - where tux-clad Larry and Balki walk out of the subway, adjust their bow ties, and cross the street to head to, presumably, the opera at this very theater - but I did), and Erin looked around the Old Navy flagship store for a little bit, while I played with this wall-sized Simon-type game they had there. I got the high score. I kind of rule. We also wandered up to the very edge of the Magnificent Mile, where we found both a Lego Store and a Sanrio store - glee for us both, whoda thunk it? Erin bought a Hello Kitty notepad, and I bought a Batman minifig keychain, and we took copious pics of the various Lego structures in and around the area.

We made our way over to the Armitage area, near Lincoln Park, which is sort of the trendy, collegey area, I guess - sort of like the Thayer Street area in Providence, or any number of places in Boston, really. Ate lunch at a place called John Barleycorn's, which had tasty food and the most guy-centric TV programming I've ever seen - all the TVs were blaring ESPN, and several of them also had a little "picture-in-picture" window in the corner alternately showing women in bikinis and people jumping off of stuff. Good food, though - I recommend the rib tips.

From there, onto Wrigley Field for the Cubs game. Bought some Cubs stuff for ourselves and the fam, and since it was Hat Day, we got free Cubs home caps, too. Very excellent ballpark experience - great seats, nice weather, really excellent hot dogs, and the Cubs actually won. Admittedly, they were playing the Pirates, the worst team in the National League right now, but still.

Headed back to the hotel, got our stuff together and vamoosed. Uneventful flight home, except for the always enjoyable cabin pressure head decompression we both experienced as we began descent. Nothing like losing most of your hearing and feeling like your head's about to implode, huh?

Anyway, despite United's best attempt to derail everything on Friday morning, it was a great trip. And I learned a few things: 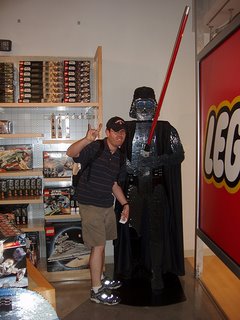 (As is, apparently, the White Man's Overbite.)

PS - Here are our non-Wizard World-related Chicago pics, if you're interested.