Monotremes make great rewards. But marsupials are still good, too.

The British sitcom Spaced, starring a pre-Shaun of the Dead Simon Pegg, is finally airing on BBC America, a channel my cable provider actually, well, provides. The first two episodes aired Friday night, but I think they're being re-run tonight (Monday) around 11, so you may be able to catch 'em still if you missed them.

I've heard so many good things about this show over the past few years that I'm excited to be able to see it without resorting to the bootleg circuit or trying to track down someone who actually had the Trio network. So far, so good. It's definitely more of a subtle build to the punchline sort of humor, but your patience will be adequately rewarded.

This is a very good thing indeed. In celebration, here's a picture of a platypus that I found: 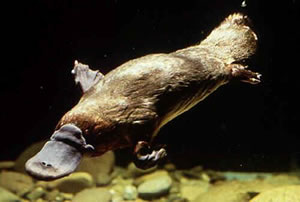 Don't say I never give you folks anything.


By the way, Tom the Dog claims to have found the greatest book in the history of the world, and I dare say that he is 100 percent correct in his findings. If agreeing with Tom on this is wrong, then I don't want to be right.
at June 26, 2006
Labels: books, TV