Ten things I’m enjoying the hell out of lately, in no particular order:

1. Increasingly mobile Liam. He has moved past the on the stomach “commando crawl” and into full-on supporting his body weight legitimate crawling. And he can walk if he has something to hold onto for support, like the couch. And he’s getting fast. Which, you know, has its good and bad sides. But either way, it’s damn impressive.

2. Infinite Crisis in Thirty Seconds! For the most part, I enjoyed the actual series. Although it was a lot bloodier than I think was really necessary. And it didn’t reach a satisfying conclusion so much as a sort of “Crap, we’re running of pages” dull thud of an ending. And that last two page spread of all the One Year Later heroes has me convinced that they’re going to screw up my precious Marvel Family even more than they already have. Um, yeah… it had its problems. But I mostly liked it. Honestly. I just think this version is superior.

3. That new American Express commercial with Wes Anderson. to both the previous AmEx ad with M. Night Shama-lama-ding-dong (in case you can’t tell, I’m not a fan) and ’s last movie, The Life Aquatic with Steve Zissou. Leave it to to rebound in the most unexpected way (and format) possible.

4. Free Comic Book Day! I had planned to hit a bunch of different shops, but first stopped into Newbury Comics (for non-New Englanders or those who didn’t read this comment thread on BeaucoupKevin’s blog, it’s a record store chain that carries comics as a sideline, despite what the nomenclature might lead you to believe) on a whim and found all the books I was looking for on the first try (as well as some other loot to buy with my birthday giftcard). So rather than spending the day wandering from store to store across Rhode Island, I got home early and went out for Chinese food and a nice walk with Erin and Liam. I win!

5. Free Comic Book Day Comics – I haven’t read ‘em all so far, but of those I’ve been able to get to, my favorites were Amelia Rules (which doesn’t surprise me, as I’ve been a fan from issue 1 and have yet to be let down), Buzzboy (so glad we get more new BB this summer), and AdHouse’s The Preposterous Voyages of Ironhide Tom, which I would argue is not only the best of this year’s lot, but possibly of every FCBD book ever released (bear in mind I’m given to superlative). It’s not only a funny story, but it taught me new synonyms for poop, including my new favorite: nightsoil! My world has been rocked.

6. The Red Sox swept the Orioles. Again! For the last few years, the Sox seemed to have this severe mental block when it came to . Even if the Orioles were bringing up the rear of the division, would lose to ‘em constantly. Let’s hope this is finally turning around.

7. Speaking of baseball, me and the boy at his first game (the Pawtucket Red Sox vs. the Durham Bulls at McCoy Stadium – no umpires harmed this time!): 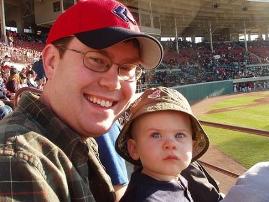 8. Grilling. Warmer weather means I get to use my grill (“Josie”) again. This is a very good thing. I believe that all foods would taste better if grilled. Even cereal. The other day, my friend Dan and I discussed the possibility of grilled pastrami. We weren’t quite sure how to do it, but were convinced that if a way could be found, it would be the tastiest lunchmeat found in nature.

9. I’m really happy that I finally got the copy of Legion of Super-Heroes Archives Vol. 4 that I bought off eBay an entire month ago. I won it on April 6th and paid the same day. The auction listing said shipping was via Media Mail and would take 5 to 7 days. That’s fine, except they didn’t even mail the damn thing until May 1st, and nowhere in the listing does it indicate it’d take that long. So, you know, that’s no good, but the book itself looks fantastic. I loves me some Silver Age DC silliness.

10. The Noggin network’s spin-off, Play With Me Sesame, aired the old “Near and Far” bit with Grover last week, and it’s even funnier than I remembered it. It further convinced me that Sesame Workshop could make a fortune selling compilation DVDs of the funniest bits from 70s & 80s episodes of Sesame Street. A lot of that stuff still plays well 30+ years later.