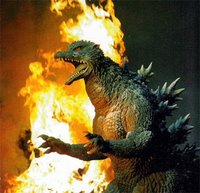 (Probable spoilers ahead - though if you're worried about spoilers for a Godzilla movie, of all things, you have bigger problems than I can help you with.)

See, here's the thing. I've been a Godzilla fan all my life. I'm not as hardcore as some - I don't call the monsters solely by their Japanese names, I don't buy the expensive import toys, I'm not morally opposed to the presence of Raymond Burr in the American versions of the first film and Godzilla 1985 - but watching a big, rubber-suited monster trample on a model town and fight some other big, rubber-suited monster is definitely my idea of a good time at the movies. But most of the films in the Big G's career have tended to follow a pretty standard formula, mixing the monster battles in with a rather boring "B-plot" involving the film's human characters - often a young scientist or two, a chaste love interest, and more often than not, a little boy in frighteningly tiny pants. They tried to shake things up a little with the films in the 80s and 90s by adding film-to-film continuity and a few recurring characters, but it was pretty much the same old problem - once the people show up, everyone decides to go get a snack or use the john. Because honestly, who watches a Godzilla movie for the actors?

The creators of Godzilla: Final Wars took a unique approach with this film, though: they decided to make the B-plot actually worth watching. It took 50 years and this being the alleged last film of the series for someone to have this particular brainstorm, but at least they got there at all, I figure. And it's the way they approach it that I think makes it even more interesting. After years of American culture borrowing influences from Japanese culture, they've borrowed back the Americanized versions back (with a little Hong Kong thrown in for good measure). What results reflects bits and pieces of The Matrix, Star Wars, Star Trek, X-Men, every team-based action cartoon ever, The Heroic Trio, and even a bit of Shaolin Soccer, among other things. For once, I didn't feel the need to fast forward to the next monster throwdown.

And oh, are there monster throwdowns. This movie features over a dozen different Toho Studios monsters, from old favorites like Mothra and Rodan to long-ignored baddies like Hedorah the Smog Monster and Ebirah the giant lobster. They even use - if you can believe it - the American movie version of Godzilla, referred to for the purposes of the movie as simply Zilla (allegedly because the American film was so terrible as to take the "God" out of Godzilla; who can argue with that?). The battle in Sydney between the real Godzilla and the American pretender is worth the price of admission alone. Just don't blink.

Also, Godzilla sort of plays soccer. It really must be seen to be believed. It's glorious.

Now, I'm not saying it's a perfect film. Just because the human characters are finally given something interesting to do doesn't mean that the acting is especially good (the Dick Butkus-esque Captain Gordon, the movie's lone Western character, is a hoot as a character, but he's not so good with reading the dialogue). And although Mothra's tiny twin priestesses, the Shobijin (or the Alilenas, or the Cosmos, depending on which movie you're watching) make an appearance, they don't sing the Mothra song. It's not an actual problem, per se, but I like the Mothra song. It's pleasant. I even have it on my iPod. Maybe I'm more hardcore about this sort of thing than I thought.

It is, however, a very fun movie. And most days, I think I'd rather watch a Fun Movie than a Fine Film. Life's enough of a downer as it is - I just want to enjoy myself in the little free time I actually have. And don't get me wrong, I love a good steak now and then; but more often than not, I'd rather just have a burger, you know?
at April 06, 2006
Labels: Godzilla, movies
Newer Post Older Post Home