Sometimes it feels like they're all watching me, and it's kind of creepy.

Well, that's not true. More like, because Psychbloke mentioned it in passing! 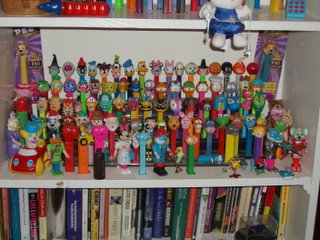 Yup, Pez is another of the great loves of my pop cultural life. Now, I'm not particularly hardcore or anything. I've never been to a Pez Con, I've never made a fantasy Pez dispenser, and I don't own any that are particularly old, rare or valuable (though as a kid, I had a soft-headed Batman, and a Captain America, and one of the rubber headed monsters and... well, I don't like thinking about that now). I do, however, have a whole lot (or, as the ancient Sumerians said, a butt load) of dispensers (over 200 at last count). Assembling this candy-popping menagerie over time has been a lot of fun, and a rather surprising bonding experience for Erin and I (more on that in a bit). And as I have everything displayed on the bookshelves in the living room, the collection is also quite a conversation piece. It's usually one of the first things people notice when they come into the house, and everyone - friend, relative, cable guy or whoever - remarks about it. And it's funny, too... you leave comic book stuff out in full view, and people start in with the "nerd" crap. You display a few hundred Pez, and they get really excited. Go figure. 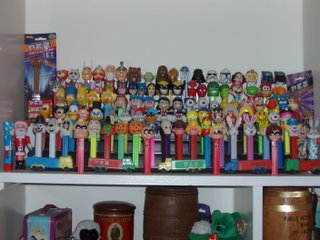 The funny thing about all this is that my wife Erin holds no small amount of blame for this particular obsession of mine. I used to buy Pez a lot as a kid (I'm telling you, I would LOVE to get that soft-head Batman or Captain America back!), but I never really started actually collecting the things until high school. Not long after Erin and I started dating in college, she left to spend her junior year abroad in Austria. Extremely long distance dating, especially so early in the relationship, is tough, but one of the things we'd do to cheer ourselves up was to send each other care packages. I'd send her Jif, Doritos, Winnie the Pooh merchandise and Optic Nerve comic books. She asked what I wanted, and I told her that since Pez originated in Europe, and that Europe generally got an entirely different selection of characters than we had here, some Pez dispensers would be quite nice, thanks.

She sent me box after overflowing box of Pez dispensers. Erin, by her own admission, is pretty compulsive. She does nothing in a small way. 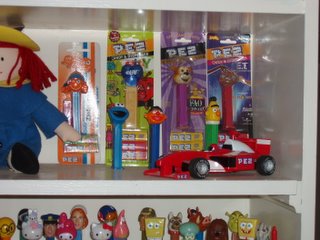 And before you ask, no, it wasn't the Pez that made me decide this was the girl I had to marry. But it helped. 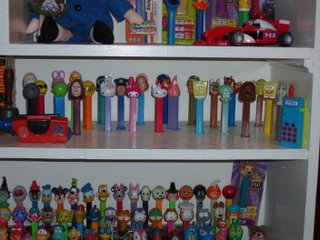 I also have a giant dispenser of Charlie Brown (wearing a Red Sox hat, which seems so appropriate) and bobbleheads of the old Bride and Groom dispensers. These just may be the most important pieces of the entire collection, as they sat in front of us on our table at our wedding reception.

Now if only I could get back those damn Batman and Captain America dispensers! Anyone have spares they'd be willing to donate? Or maybe a Spaceman, or Uncle Sam? Or a Make-A-Face? Please?

Here are some Pez links:

- The Pez official site, which connects you to both the American and European halves of the company. Sadly, though, it doesn't look like the webstore has been updated in forever.
- Pez Central, a good source for all manner of Pez-related goodness.
- Custom Pez for your business, direct from the Pez company itself. The minium order is only 2 million dispensers.
- A Pez Boy MP3 player. It has 512 mb of memory, is Windows and Mac compatible, and "comes preloaded with great indie music."
- Pez Collector's News, complete with info on all sorts of Pez conventions.
- The Burlingame Pez Museum in Burlingame, California. If I ever get to go on my fantasy road trip of cheesy and fun American tourist destinations, this will definitely be a stop. For now, I'll have to settle for the PodTrip audio tour.
at November 03, 2005