My friend Dan and I went to Wizard World Boston on Saturday, and by and large, we had a fun time. As is to be expected, it’s pretty superhero-centric, but if you like that sort of thing – and we do – then this is the sort of thing you’d like.

Now, I’m not the sort of person who’s really cut out to do any sort of full-fledged con report. As I said earlier in the week, I don’t really go for the big time announcements, the panels, the gaming or the social aspects. I go to comic shows to buy cool stuff for cheap. The two states where I’ve lived through the years, Maine and Rhode Island, aren’t exactly hotbeds of the comic retail universe, so these events provide opportunities I don’t get very often. So I’m in no way capable of giving any sort of blow-by-blow account of the day’s events, but here are some brief observations.

- We met Alex Robinson (of Box Office Poison fame) and his wife (whose name I forget now, sadly) at the Comic Book Legal Defense Fund table, and let me tell you, they are two of the friendliest comic book people I’ve ever had the pleasure of meeting. We ended up stopping by the table twice and had long conversations with them both times. I picked up Alex’s new book, Tricked, which he signed and sketched in for me, and Dan and I both received some really beautiful superhero sketches he drew (I got Supergirl, Dan got Zatanna) in return for becoming CBLDF members. I’ll have to post a scan of the Supergirl sketch sometime. It’s really excellent. So anyway, buy lots of Alex Robinson comic books, because he’s good people. 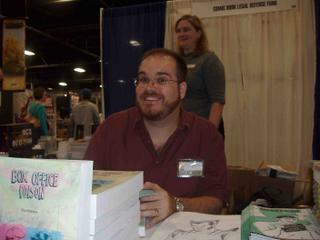 Alex Robinson, more than happy to sell me stuff.

- Eliza Dushku’s security detail whisked her past us while we were at the CBLDF table the second time around. Good lord, is that woman tiny! Like “feed her a cheeseburger, STAT!” tiny. Give her a strong breeze and an aerodynamic hat, and she could do a spot-on Sister Bertrille imitation. On the other end of the spectrum, pro wrestling legend Mick Foley looks even more husky than he used to now that he’s no longer regular in-ring talent. If these two were to trade lunches, they’d both benefit.

- Lou Ferrigno is more buff than any man his age has a right to be. I’ve heard numerous times that he’s kind of a dick in person, but I doubt anybody would be brave enough to say it to his face.

- Palisades Toys must be the greatest company to work for in the world. I’ve seen their booth at two shows now (this one and WW Philly last year), and both times everyone was incredibly friendly, and they all looked like they were having fun. And I’m talking legitimately friendly and fun, not that fake “I’m trying to sell you something so I’ll put on a big, shit-eating grin and laugh a little more often than is necessary” friendly and fun. Nice folks. Plus, I was able to snag the last Super Grover figure they had (at least for Saturday… not sure if they had a set limit to sell for each day, like how WizKids limits sales on the Heroclix convention premiums, or if I got the For Real Last One of the Show), so that was pretty cool.

- Comics Retail Inflation: the Dollar Box is the new Quarter Bin. But then again, most of the dollar boxes we saw were filled with some really excellent stuff (I picked up the entire Great Darkness Saga for about a third of what it would cost to buy the TPB), so it’s not like I minded the rate hike so much. There were some quarter bins to be found, though, but they were filled mostly with really worn 80s books and the usual 90s detritus.

- Of course, there were stormtroopers: 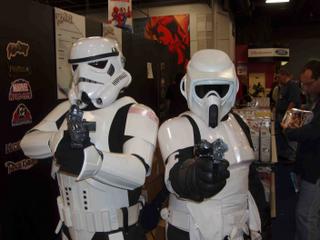 “I think we’ll be the judge as to whether or not these are the droids we’re looking for, pal.”

- A lot of booths were well-stocked with half-priced TPBs for sale, but it seemed like all these places had the exact same stuff! You could have built a rather large house out of the all the copies of “How to Draw Manga” or Marvel Encyclopedia volumes we saw. And so much of the stock was in rough shape, too. I noticed a lot of books had the telltale magic marker “remainder” line across the tops, so I think I’ve discovered what happens to bookstores’ unsold graphic novels. There was some good stuff to be found, but you really had to hunt. And recent collections I had put off buying because I figured I’d find them here (like the Superman Showcase, the Avengers Serpent Crown book or the Sgt. Rock digest), were completely absent.

- One of the bargain TPB booth proprietors had herself a little salespitch. She’d yell, “All books 50% off, ALLLLLLLLLLLLLL books 50%!” Repeatedly. All. Day. Long. With no less than a 30 second break in-between. I heard that woman’s rant in my dreams last night. They weren’t good dreams. I snuggled in a little closer to Erin for protection.

- Artificial heat index: Someone had the Blue Beetle issue of Secret Origins for $15. Um, no, I don’t think so, not even with the excellent Gil Kane artwork found inside, thanks. Someone else had the John Byrne issue of Superman that introduced the Matrix Supergirl for, again, $15, with a sign reading “1st New Supergirl – HOT!” Wrong series, wrong Supergirl, bad retailer (go lay down!). I just shook my head and walked away. I realize now I should have kicked him in the sack.

- The sort of ATM line you’re only going to see at a con: 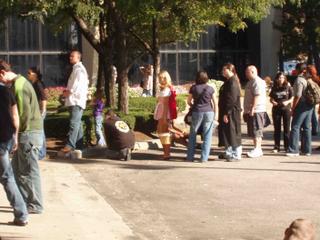 On a similar “only here” note, I also saw Batman headed in to use the can. No pics of that, thankfully, but the image will stay burned in my brain for years.

- Last but not least, the official Warriors of Plasm count was a mere two copies of the collected edition. By my index, that means Wizard World Boston was a good show. 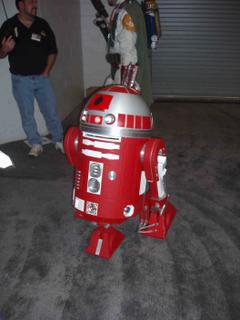