Does anybody even read these titles? 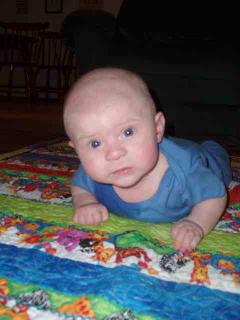 Liam was baptized yesterday, so according to Erin's grandmother, he won't be going to Hell; so he's got that going for him, which is nice. God is apparently rewarding him other ways, too (as if a pass on Original Sin wasn't enough), since he was able to support the weight of his big ol' noggin with his neck for a sustained period during his tummytime session this morning. Previously, he'd support his whole upper body with his arms for a few moments before ending up flat on his face, so this was a pretty cool thing to see happen. Of course, given my work schedule, this may have been going on for like a week now and I just haven't been around to see it, but it's new to me, so therefore it's the first time.

Yeah, babyblogging is probably boring for those without babies, but at least I'm not one of those incessant catbloggers.

So this is a big week here at Trusty Plinko Stick World Headquarters. As mentioned above, Liam avoided the gaping maw of Hell (again, according to Grandma Degnan) by having a diminutive Episcopalian minister splash about a half gallon of water on his head, which in the grand scheme of things, is probably the only important event to occur. But on top of that, this upcoming weekend marks an event that has come to be known in our house as The Festival of Geekmas, though it is probably better known to the world at large as Wizard World Boston. Sure, it lacks the indie cred of SPX or APE, the media chutzpah of Comicon, or the smaller, "mom & pop shop" vibe of a show like the recent Baltimore con, but A.) I'm the rare fan who goes to comic shows for the chance to buy a whole lot of stuff I can't find elsewhere at bargain prices rather than for any social aspects; and B.) there's a real lack of this sort of thing in New England, so we take what we can get. Besides, I did have fun at WW Philly last year, so I have hopes for a similarly enjoyable day this time around.

And last, according to the calendar, this Friday, September 30th, is my one year bloggaversary. I'm a bit in awe of this, really. I'm generally the sort of person who will start a project with the greatest of intentions, and then get gradually more bored with it as time goes on, eventually giving up altogether, so I'm pretty proud of myself that I've kept it going this long. Yay me. Anyway, I hope to find the time for several updates this week to mark the occasion (or, you know, at least one), so watch for that.

Some bloggy business before I end this rather rambly missive:

- My wife Erin went and started herself a blog, Sic Transit Gloria (named after her favorite song by the band Brand New). It details the life of, in her words, "a new mommy, just trying to get by," and as you'd expect from a description like that, there are lots more pictures of Liam posted there. And if you're anything like either of us, you're pretty much convinced he's the cutest baby in the entire world (and he is - not that we're biased or anything), so more Liam is always a good thing. Check it out. I'm sure she'd appreciate it.

- I've been taking my first steps into exploring the vast podcast universe, and so far, the best comics-related cast I've found is Lene Taylor's "I Read Comics" (link brings you to the show-related blog). Taylor is intelligent, well-informed and on the whole, very professional, and the show is very well-produced, sounding a bit like what I'd imagine an NPR show about comics would sound like. These factors combine to make it as good a listen in form as it is in content. It's a half-hour well spent.

- Also check out Sophie Yanow's Gumpop if you get the chance. Part comics, part indie rock, part college life, and a lot of fun. Plus, I dig the logo.
at September 26, 2005